NASA’s Space Shuttle launched in 1981 and flew its final mission in 2011. Over three decades its 135 missions changed spaceflight forever.

NASA’s first Space Shuttle commander was on the Moon in April 1972 when news arrived that America’s first reusable spacecraft had been green-lighted for development. “The country needs that Shuttle mighty bad,” astronaut John Young remarked. “You’ll see.” He was right.

Delta-winged, of similar size to a DC-3 airliner, the Space Shuttle boasted a two-tiered cockpit and 60-foot-long payload bay to launch and recover satellites and perform wide-ranging research from medicine to materials processing, solar physics to Earth sciences and technology to astronomy in Europe’s purpose-built Spacelab.

Aided by its Canadian robot arm, it advertised weekly missions with up to seven-member crews.

F. Story Musgrave pictured on the Canadarm during STS-61 as he prepares to be hoisted onto the top of the Hubble Space Telescope during the telescope’s first servicing mission, December 1993. Credit: NASA

Space Shuttle astronauts worked from the ten-windowed flight-deck, whilst a mid-deck provided living quarters including galley, toilet and sleep stations.

But powerful Air Force support for the Shuttle came at the cost of a compromised design and the need to cater for military customers.

In addition to two launch pads at the Kennedy Space Center in Florida, a military site at Vandenberg Air Force Base in California (eventually never used) was built for classified flights.

And despite being touted ‘reusable’, only the Shuttle and its twin solid-rocket boosters—which together produced 7.5 million pounds of liftoff thrust—were recoverable.

Launched like a rocket, the Shuttle glided unpowered to a 200 mph runway landing, whilst the boosters parachuted into the ocean for retrieval.

A 15-story external tank fed liquid oxygen and hydrogen to the Shuttle’s three main engines but was discarded after each flight.

On the pad, the 184-foot-tall ‘stack’ cut a peculiarly asymmetric figure; one astronaut likened it to a butterfly bolted onto a bullet.

Its technology proved notoriously difficult to tame, forcing NASA to fix problems with the main engines and thousands of heat-resistant tiles on its airframe to guard against temperature extremes of 1,650 Celsius during re-entry.

Those troubles, never fully resolved, would haunt the Space Shuttle in later life.

The Shuttle programme was declared operational the following year, but despite turning a profit by launching satellites commercially its veneer of respectability masked many cracks.

Heat-resistant tiles fell off during launch and the solid-rocket boosters showed worrying signs that hot gas was leaking through sealed joints.

One Shuttle suffered seized brakes and a burst tyre on the runway, another endured a main engine failure at the edge of space and an overstretched workforce was pressured to meet breakneck launch schedules.

Astronauts flew jet-powered backpacks, captured and repaired satellites and by 1985 the four-strong fleet of Columbia, Challenger, Discovery and Atlantis – all named for seafaring vessels – was flying almost every month.

Then in January 1986, Challenger exploded 73 seconds into its flight, killing its seven crew members, which included schoolteacher Christa McAuliffe.

Blame fell on the solid-rocket boosters and a safety culture that one astronaut called “normalisation of deviance”.

Returning to flight in 1988, the Shuttle was never the same again. Astronauts wore pressure suits and non-professional passengers – schoolteachers, senators, industry workers – were banned. The Shuttle would only be used when its capabilities were needed.

A new vehicle, Endeavour, replaced Challenger and the Shuttle launched several important payloads, including the Hubble Space Telescope, the Compton Gamma Ray Observatory and the Chandra X-ray Observatory, as well as the Magellan, Galileo and Ulysses probes.

The Space Shuttle supported dozens of science missions and in 1993 space-walkers triumphantly fixed Hubble’s impaired vision; a defect that had only been discovered after the telescope’s launch into Earth orbit.

In doing so, NASA and its astronauts about-turned negative public opinion and made the Shuttle ‘cool’ again.

Building a space station remained a fundamental goal, although its complexity and cost kept it teetering on the edge of cancellation.

But the collapse of the Soviet Union garnered hope that the Shuttle might, at last, have somewhere to shuttle to.

From 1995, it flew ten times to Russia’s Mir space station, delivering both astronauts and supplies, before work to assemble the International Space Station commenced in 1998.

In 1999, a crew came just one failure away from an emergency landing. Independent safety auditors warned that without substantial upgrades, the Shuttle’s lack of an effective escape system would doom a mission.

In October 2002, explosive bolts on Space Shuttle Atlantis failed to fire at liftoff; only their quick-acting backups saved the day. Another bullet was dodged in this high-stakes roulette game.

By now, the International Space Station was in orbit, permanently inhabited, but schedule pressures to complete it crept again into NASA’s mindset.

In February 2003, Shuttle Columbia was destroyed during re-entry. This time the technical cause was a chunk of falling foam from the external tank, which struck and crippled the heat-resistant tiles during launch.

The crew completed their mission in space, yet during re-entry the damage that had been done caused Columbia to break up in the air, killing all seven crew members.

The surviving Shuttles returned to flight in 2005, but the programme’s retirement was inevitable.

NASA pared down the remaining flights to service the Hubble Space Telescope once more and finish building the International Space Station, before the Shuttle’s wheels kissed the runway for the final time in July 2011.

Thirty years of service by five Shuttles cemented the credentials of this brilliant, albeit flawed machine.

It saw the first female commander, the first married couple, the first politician and the first royalty in space.

It set records for the oldest astronaut, the greatest number of missions by men and women and the longest-ever spacewalk.

Astronaut Sally Ride became the first American woman in space aboard Space Shuttle Challenger on mission STS-7, which launched 18 June 1983. She later said: “I’m sure it was the most fun I’ll ever have in my life.” Credit: NASA

The Shuttle never made good on its promise of weekly missions, yet these three retirees and their fallen sisters Challenger and Columbia wistfully remind us of a bygone era that forever changed our view of the Universe around us.

Gallery: the era of the Space Shuttle in pictures 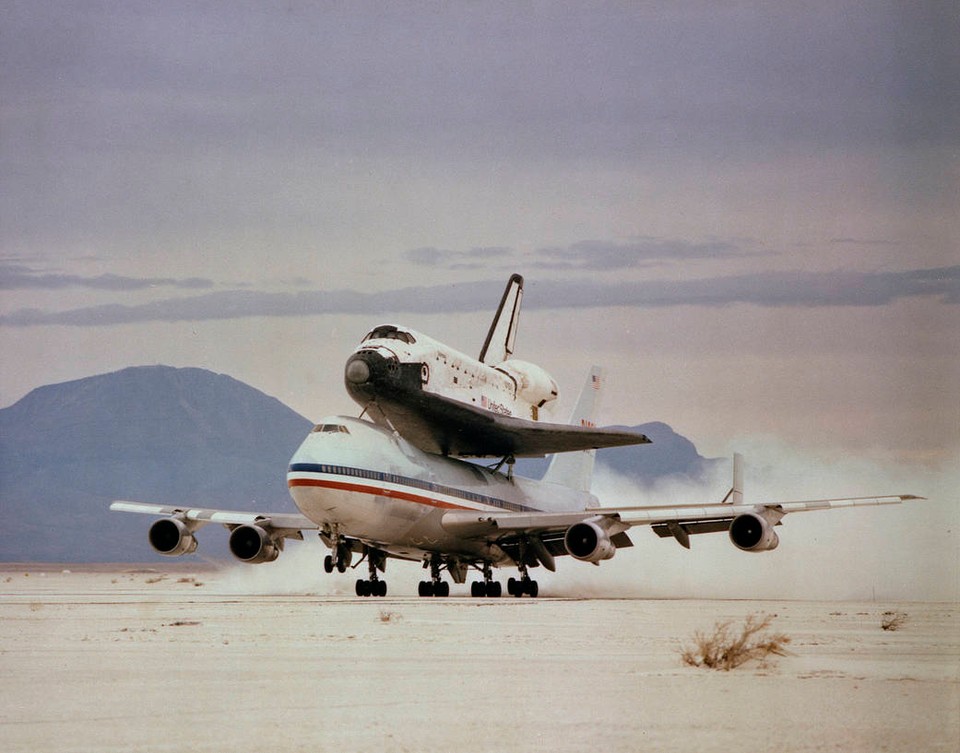